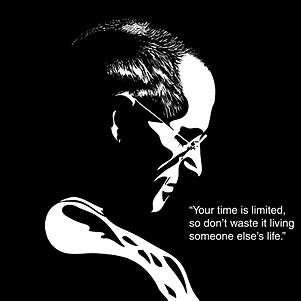 I already published an article on final tribute on Steve Jobs by famous persons. Today I add here famous date of his whole life.

Born :24 February 1955. He was adopted. Jobs dropped out from Oregon’s Reed College after finishing one semester.Then he joined in Calligraphy class. Later he says that it help him to built first Macintosh computer.

12 September 1985 : Steve fired out from Apple & strted new company Next Computer by $7 crore

10 November 1997 : Online Apple Store launched. So anyone can buy Apple product through online.

[pullquote]Quote From Steve Jobs “Sometimes when you innovate, you make mistakes. It is best to admit them quickly, and get on with improving your other innovations.”[/pullquote]

24 August 2011: Resigned from Apple & continue as a Chairman

5 October  2011 : At the age of 56, Chief executive and co-founder of US technology giant Apple Steve Jobs died

Goodbye, Mr. Jobs. May your soul rest in peace in your eternal life