Facebook is the most popular social network. It already reached its peak & I think no one will able to touch it. It constantly changes its feature to maintain its popularity among users.

From September 26 Facebook added a new feature – Status Edit Feature. I think its not new for Facebook users. We already saw this feature in comment section. After commenting if we want to change the comment, we just click EDIT then it will change immediately.

Facebook Status Edit Feature is also similar like that. After publishing the status, if you think you need to modify the status or edit wrong words you can do it now easily. Previously after publishing a status there is no option to edit. So you need to delete it or keep it.

It is currently works for Desktop users, Android Facebook app users. Soon iphone & ipad users will get this facility. 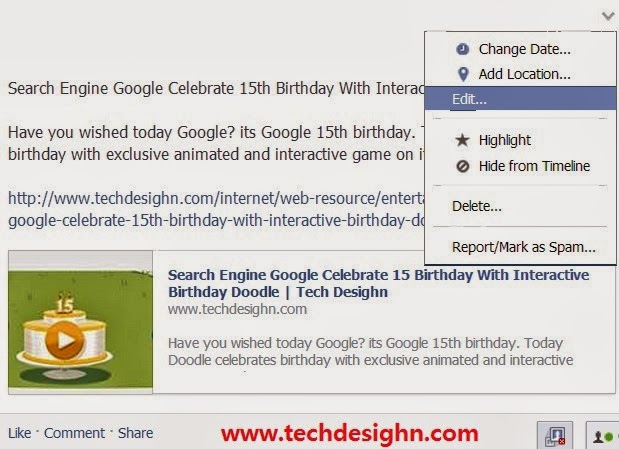 This status edit feature is a challenge for Facebook authority. If anyone give a status then he will get lots of comment & like then again he may modify the status & add some bad words. But to avoid this problem like previous comment feature, it has also status edit log feature. It will show below the status how many times it modified or edited.

To edit your status just click arrow mark right side of the status. Click Edit then modify the status. Simple as water!

So guys what do you think about Facebook Status Edit Feature?