Every year Deutsche Welle declares International Blog Awards. In short, it is called The BOBs. The BOBs honors websites in 11 languages that open exchange of ideas and freedom of expression.

The BOBs is the Deutsche Welle ongoing efforts. It helps to contribute on promoting freedom of expression and the upholding of human rights around the world.

Arash Sigarchi’s blog “Window of Anguish” is well-known and widely read in the Persian community & in Iran. While he was living in Iran, he was arrested for several times for the content he published on his blog and sentenced to 14 years behind bars.

Razan Ghazzawi is one of the few bloggers in Syria who writes using her real name, advocating for the rights of bloggers and activists arrested by the Syrian regime. The Free Razan campaign was launched after her arrest calling for her release with a Facebook page that was launched on the same day of her arrest. This page is now dedicated to call for the release of her male colleagues at the human rights and press freedom organization SCM, who have been detained since February 16, 2012.

Fasokan helps to promotes local languages and cultures on his bilingual, personal blog in Mali. He introduced village people to the Internet and basic search on the Web during an educational cruise on river Niger in Mali. He tries to give them basic knowledge on computer too.

Best Use of Technology for Social Good

Harassmap takes aim at sexual harassment in Egypt. It allows victims to report incidents of harassment and maps them by type and location. Reports can be made via the website or text message.

Pi San is the creator of this mischievous cartoon series whose main character goes by the name Kuang Kuang. “Little Rabbit, Be Good,” made last year, tells the story of rabbits that suffer endless abuses under the rule of tigers who promise to “build a harmonious forest.” Rabbit babies die from drinking poisoned milk, and in another episode a reckless tiger driver kills a rabbit in a hit-and-run and boasts about his high-level police protection.

Abu Sufian is a Bangladeshi blogger. He raises his voice against injustice of many kinds such as law and order, the recent killing of the journalists Sagar and Runi in the society. Abu risks his own life to report on the crimes in detail.

After witnessing widespread voting fraud during parliamentary elections, many engaged citizens in Russia decided they would only rely on themselves when it came to observing the presidential election on March 4. One way they could do it was with the “Web Election Observer” app for iPhones and Android. The simple and easy-to-use app lets observers document any irregularities they see and record them on an interactive map. Information and laws regarding elections and observers was provided to the app’s developers by the “Golos” non-governmental organization.

On October 1, 2011, news broke that blogger Asif Mohiuddin had been arrested because of his involvement in a popular student movement. Asif remained detained for the night before being released. Asif Mohiuddin’s blog received huge attention when he started writing against a particular university’s so-called “development fee,” which poor students were unable to pay. His writing inspired the students to unite and after a series of protests, the government was forced to change the decision to impose the fee.

Beijing-based blogger Woeser reports about the current situation in Tibet. Woeser, an outspoken critic of Chinese government policies in Tibet, has written about a series of recent self-immolation among monks and arrests of Tibetan intellectuals in western China.

Since 2007, this video channel has lived by the motto of “laughing in order to avoid crying.” Aware of the problems in the society, its creators say that it will be difficult to change the world. But then they go ahead and try it.

The 2011-2012 campaign in Russia provided ample material for political satire, which due to censorship of traditional media found a home on the Internet. “Citizen and Poet” is a brilliant example. The poet Dmitry Bykow regularly reinterpreted the works of Russian and other classic poets and used the late poets’ words to comment on the previous day’s events. The actor Michail Efremov presented the

parodies in a series of videos.

Khaled Safi is a Palestinian blogger and Web designer living in Gaza. He blogs about Palestine as well as social media, marketing, and Internet privacy.

Dr. Niaz Mowla’s blog is a good mixture of history, culture and social issues. His blog on his journey to Libya was rewarded with an excellent response on the part of the viewers.

iGFW provides some of the most detailed and complete information on how to break through Internet censorship in China, as well as how normal users can effectively “share” this information.

This blog is written by multiple authors. The Chronikler “seeks to shed an alternative light on contemporary events and ideas, from the controversial to the comic.”

Florian Ngimbis is a young writer and blogger living in Yaoundé, Cameroon. With great wit, his blog chronicles the big and small stories in Cameroon, from presidential elections to a catastrophic date with a lady friend who happened to wear a wig during a pelting rain.

A personal blog written by a very young woman who became a paraplegic after an accident when she was 15. She provides a very blunt and unfiltered look into her life.

Dhiora Bintang was born in Sukabumi, Indonesia. His interest and passion for writing brought him numerous honors. This personal blog features him blogging on peace and pluralism issues in Indonesia.

Narenji is one of the most famous Iranian group blogs on gadgets.

it’s the name of a collective journalism project about free services and cultural activities in Sao Paulo and the surrounding area. “The greatest human adventure is the adventure of lifelong learning,” according to Catraca Livre. With its reports on what’s free and available, the site aims to “tear down walls.”

While many people dream of traveling the world, few take the chance to live such a life. Stas Kulesch is one of the people who made the leap. Born in Russia, he’s lived for over six years in New Zealand and keeps up a blog where he shows videos of his live on the other side of the world and shares his thoughts on dreams and making them come true.

Chino Chano provides another point of view about China. In the author’s opinion, media only present part of the reality of the country. He tries not to be polarized and influenced by international interests and look for the other side of China. 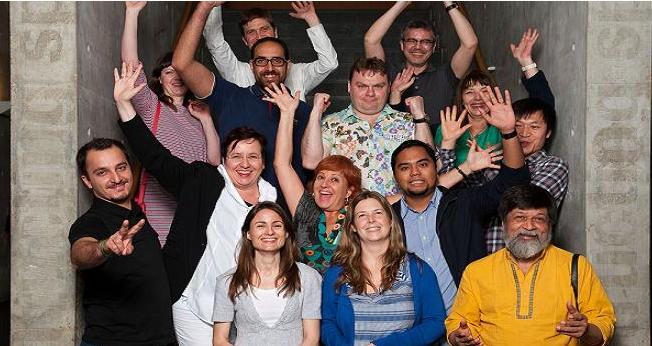 In Jury Board there are famous bloggers & persons of the world:

Tarek Amr is an Egyptian blogger who has been writing his blog since 2005.

Steve Vosloo is from South Africa. He was a research fellow at Stanford University, where he researched youth and digital media. He is currently working as a program specialist for mobile learning at UNESCO in Paris.

Shahidul Alam is from Bangladesh. Shahidul holds presentations around the world on topic including photography, new media and education. Shahidul is a founding member and advisor in the LEARN Foundation, which is dedicated to ICT training in rural regions.

Rosana Hermann is an author, script writer, TV host and one of Brazil’s most popular bloggers.

Patricia Cammarata lives in Berlin, Germany. She studied psychology and philosophy and worked for a number of years as a IT project manager.

Marilin Gonzalo is a journalist and social media expert from Córdoba, Argentina.

Lucie Morillon heads the Internet Freedom Desk at Reporters Without Borders in Paris. She gives support to imprisoned journalists and bloggers.

Enda is the first Indonesian contributor to Global Voices. He chaired the first Pesta Blogger in 2007, Indonesia’s annual blogger conference.

Claire Ulrich  is a journalist with more than 20 years professional experience in traditional print and TV media.

Kamangir is an Iranian blogger. He started blogging back in 2004. At first, he wrote in English but now mainly in Persian.

Alexander Plushev is a journalist, Internet expert and a top-rate Russian blogger.

On 26th June, only the Jury winners will be awarded in Germany in “Global Media Forum”